5 Tips for Flying with a Baby

So, it just so happened to work out that little A’s first flight ever took off on December 23, two days before Christmas. We also happened to be flying into one of the busiest airports in the country, LAX in California.

Flying with kids can seem like a daunting task, but this list of tips is here to help you successfully reach your destination with, at least most of, your hair! 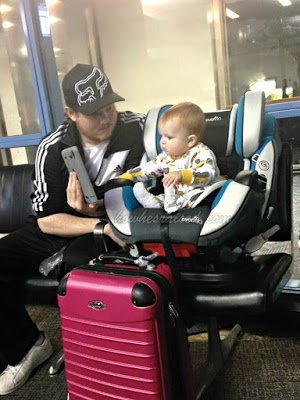 1. Bring the Car Seat
This tip is especially helpful for those little ones who can’t walk yet. We actually got this carseat while in California, so we didn’t have one on the trip out there, and I had no idea how much I was missing out on! It was such a backsaver  to be able to set him in his seat, flip on some cartoon or music or something, and let him relax as you wait for your plane.
It’s super easy to check the seat at the gate, that way you’ll have it during a layover. We had a 2 hour layover on the way home, during which little A slept in his carseat for the entire duration of.
2. Book the Red Eye
Not only that, but really wear your kiddo out the day of your flight. Family passed little A around, and we kept him awake all day, which helped so much.
On our flight out there, we left at 11 AM, so little man was awake for most of our traveling. And for anyone who knows anything about kids, it’s kind of tough to keep them restrained and entertained for 7 hours straight. Our flight home was so much less stressful because he slept the. entire. time. It was so great. 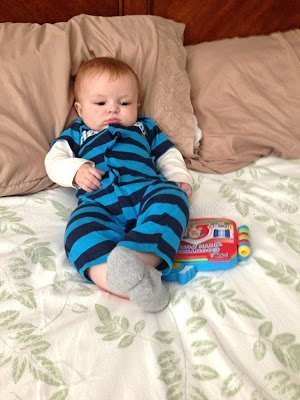 3. Don’t Give Medication
Prior to flying, so many people told us to give little A medication the day of to make him sleep. As convenient as that might make things, all drugs (including Benadryl) come with potential risks. Unless a child is in need of medication, there is no reason to administer it.
4. Bring Toys
Babies can be a bit more difficult to entertain than older children who may be okay watching a movie or playing a game. We loaded the diaper bag with a bunch of new toys that little A had never played with before. Infants are intrigued by new things, so these held his attention for quite awhile.
A woman who sat next to us during one of our flights actually gave us a great piece of advice that I’d love to try someday. She said that she would go to the Dollar Store and buy a bunch of cheap toys and then wrap them in gift wrap. She’d then give her baby one toy at a time. And, after seeing little A over Christmas I know this would really work! Not only does it take him forever to unwrap gifts, but his attention is captured the entire time. 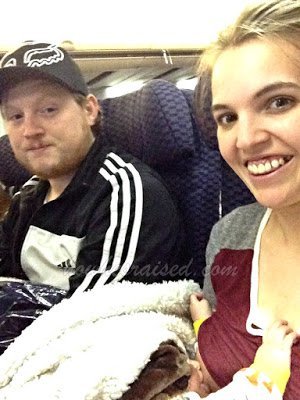 5. Nurse during Takeoff/Landing
Our biggest struggle with fussiness was definitely during takeoff and landing. As we all know, flying in an airplane really messes with your ears. For babies, this can really get painful. While we, as adults can chew gum and try to pop our ears ourselves, babies cannot.
Nursing during these times actually calmed little A so much that he would fall asleep. I think it was the mix of eating and turbulence, haha!
Flying with a baby isn’t nearly as hard as I’d worked myself up to believe. Little A did great, and we got there safe and sound. If your little one does get fussy, focus yourself on calming them, and not on the people around you. Don’t panic, babies cry and people have to get over it.
You’re doing great! Happy Flying.
Until next time,
Savannah
Post Views: 300