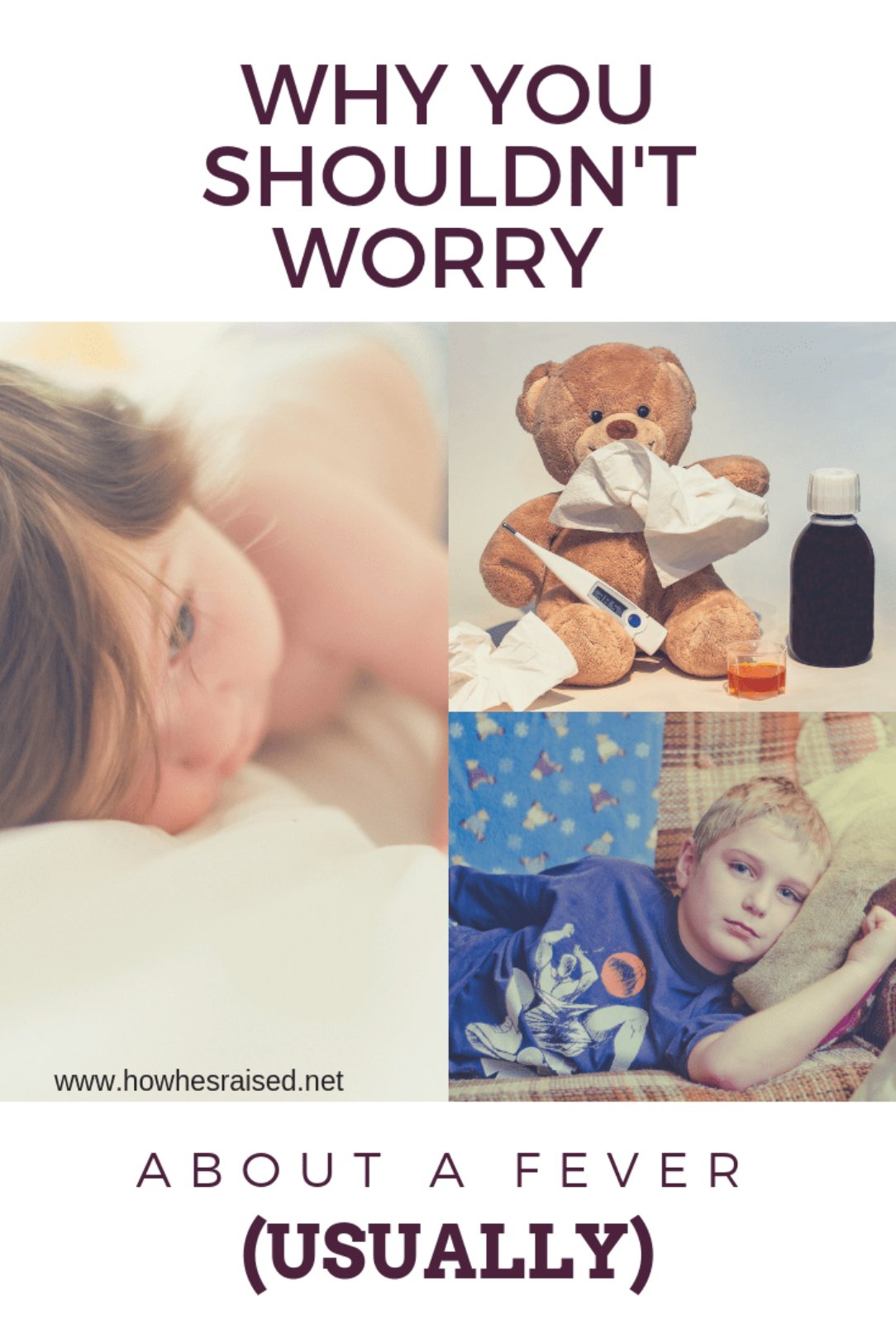 This post is meant for educational purposes only. It is not intended to replace medical advice from your physician, doctor or health care professional.

I grew up fighting fevers.
I know it sounds funny, but it’s true. When I was a kid, my mom would quickly follow the phrase “You have a fever” with “Take some medication.” All the way up until a year or two ago, it was my honest belief that a fever, being a sign of illness, was a bad thing and needed to be broken. Now a mother myself, I am deeply intrigued by the happenings of the body, and I like to try and find the best and most natural way to respond. So, it may surprise you a little to read that, in general, fevers are a good thing.

What is a Fever?

First thing’s first, what exactly is a fever? Scientifically speaking, it is an increase in regulated temperature caused by your internal “set-point” being higher than normal. This definition is special, because this eliminates people who may have an elevated body temperature due to environmental factors, like being in the heat for too long. In the 1940s, it was first discovered that it is not the illness that causes the fever, but instead it is caused by the body releasing a fever-inducing protein, leukocytic pyrogen[1]. Fever is also not just specific to humans, it is a widespread phenomenon. Nearly all vertebrates in the animal kingdom have their own unique way of generating a fever in order to treat infection. Lizards, snakes, alligators, and other cold-blooded animals have been found to, when feeling ill, seek out spots directly in the sun in order to induce a higher than normal body temperature.

A Fever is a Good Thing

Raising your internal temperature, and then maintaining the new temperature, can be very taxing on the body. One reason, even if no other symptoms are present, that a higher body temperature tends to leave us feeling fatigued is because a jump of even 2°F above normal body temperature increases the metabolic rate by at least 10%. According to M.J. Kluger, a scientist who remains well known in the field of fever and the immune system, “it is improbable that fever would have evolved and been retained throughout the vertebrates and invertebrates without being of benefit to the host.”[2]

As a parent though, fevers can be scary. In order to really appreciate and understand the fever, a parent must first know that high fevers are very common in young children. One thing that many parents don’t know is that brain damage, caused by a fever, cannot occur until around 108°F[3]. Another encouraging fact about fever is that your body has a built-in thermostat. The hypothalamus is in charge of controlling your body temperature, and it simply will not allow your body temperature to climb above 106°F. Of course, circumstances like being left in a hot car, or severe illness can damage the hypothalamus, but it is still near-impossible to suffer brain damage from a fever caused by a bacterial or viral infection[4].

So, why exactly is it bad to suppress a fever? Well, because fevers are a good thing overall, and by suppressing it, you are slowing your body’s healing process. Your body naturally produces white-blood cells to fight viruses, bacteria, and infection. When your core body temperature is raised by fever, these types of cells are enhanced. Scientists have recently identified one specific type (CD8+Cytotoxic T-cell) which is capable of destroying tumor cells, and cells infected with viruses[5]. When the body temperature is raised, these cells increase in amount, and are stronger against foreign cells. When your body temperature increases, iron levels in your blood begin to decrease. Until recently, it was believed that this was a dangerous aspect of fever, but new evidence has revealed that it is, yet another, incredible benefit – perfectly designed by the body[6]. Bacteria are reliant on iron for survival, and your increased body temperature make them need it in even higher amounts. The combination of high body temperature and low iron levels make your body inhabitable to foreigners[7].

Another amazing benefit of fever is the production of a protein called Interferon. These proteins are released by the host and their job is to seek out viruses, bacteria, parasites, and even tumor cells. They then alert the body to the invaders. These proteins are produced in high amounts during a fever[8,9].

A fever makes your body a really unfriendly place for the bad guys, and by breaking it, you are only stopping your body from doing what it is naturally supposed to in order to fight the infection. I once heard it compared to essentially shooting your own guard dog, and that really made a lot of sense to me.

Along with brain damage, one of the biggest concerns many parents seem to have about fever is the possibility of seizures. Febrile seizures, or a seizure induced by fever, are the most common type of convulsions in young children. Even still, these seizures are very rare and occur in less than 5% of children. Contrary to popular belief, febrile seizures can not be prevented by fever-reducing medications, as it is not typically how high a temperature is that causes the temperature, but they are actually most likely to occur when the body rapidly changes temperature. So, when a child’s fever spikes quickly, they are at a greater risk of having a febrile seizure, just the same as when their body temperature decreases significantly in a short period of time. This is why it is never recommended to do several things at once in attempt to lower the fever[10].

And, as parents, instead of fearing an event (such as a febrile seizure), it’s best to be armed with knowledge before the event should ever occur. When it comes to understanding febrile seizures, though the event may be terrifying, the outcome is encouraging. According to the National Institute of Health “The vast majority of febrile seizures are short and do not cause any long-term damage. There is no evidence that short febrile seizures cause brain damage.  Large studies have found that even children with prolonged febrile seizures have normal school achievement and perform as well on intellectual tests as their siblings who do not have seizures.  Even when the seizures last a long time, most children recover completely.”[11]

When compared with the devastating side effects that can be caused by drugs like Acetaminophen, allowing a fever to run its course really does seem to be the safest decision.

More often than not, fevers are a normal part of the healing process, and nothing to worry about. While this may be true for the majority of cases, it is still important to remember that a fever is a sign that something is wrong and should be monitored.

Dr. Ben Kim, a chiropractor and acupuncturist, suggests that you seek medical attention should your fever be accompanied by any of these symptoms:

Fevers are also especially concerning for newborns (babies under 3 months old), and as pointed out by well-respected pediatrician Dr. Bob Sears:

If your infant is 6 weeks or younger, and has a fever of 101 degrees or higher, this is considered a medical emergency. Infants age 7 weeks to three months with a fever over 101 warrant an appointment with your doctor within the next several hours.

So, please, allow your body to do its thing, nature is so much smarter than you think.