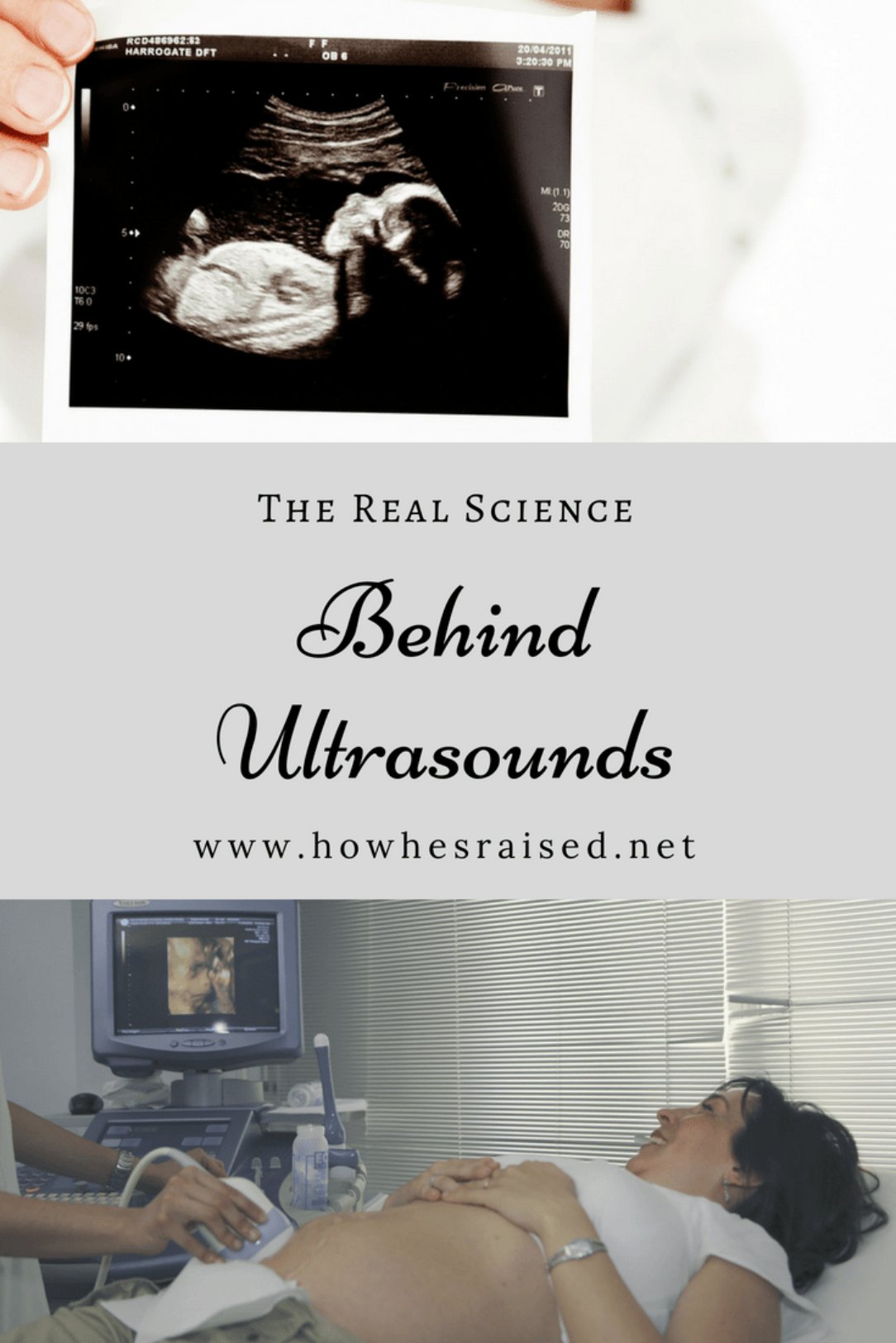 I remember the first time I saw my little peanut on the screen during my first pregnancy. I was 8 weeks along, and as the sound of his heartbeat filled the room, any worry or doubt that I had was washed away. Tears filled my eyes as I watched my gummy bear, and I marveled behind the science of modern medicine. Ultrasounds have become an expected part of pregnancy, with most (about 7 out of 10) pregnant women opting for at least one. Today, it’s difficult for many women to imagine going through a pregnancy without seeing their baby, but the technology is actually very new. Sonogram machines were introduced to medicine in the 1950s, but it wasn’t until the mid-80s and 90s that women were offered routine screening[1]. I remember the ultrasound being so normal that I didn’t even think to question the possible side effects or risks that could come of it.

But, now I’m pregnant with jellybean #2 and am older and a whole lot more skeptical. So, before agreeing to any procedures, I decided to heavily conduct my own research on the topic. And, here’s what I found about ultrasounds.

There are generally about four main reasons a woman having a low-risk pregnancy may decide on having a routine ultrasound done:

In the beginning of this pregnancy, there was some pressure I put on myself to have an ultrasound to determine the due date. Because I am still breastfeeding my son, my period was not regular at all, so I knew that basing my pregnancy on it was likely to be inaccurate. But really, how accurate is ultrasound? Even if science was able to determine the precise gestational age of the baby, it cannot predict the future, and not all babies arrive at exactly 40 weeks – in fact, only about 3-5% of women give birth on the due date. One study compared delivery date accuracy between ultrasound and last menstrual period (LMP). It was determined that both can be about equally accurate, with 61.8% of women giving birth within 7 days of their EDD by ultrasound, and 61.1% of women giving birth within 7 days of their EDD based on LMP[2]. One problem that may exist when conducting routine ultrasounds to determine dating, is that women begin to cling to this date. Because their baby was medically measured and examined, some women may view that due date almost as a definite. This absolutely raises the concern of unnecessary induction, as “prolonged pregnancy” is the number one reason for induction of labor[3]. To shorten the length of their pregnancy, about 50% of women opted for an elective induction when it was offered, and a rising number of expectant mothers are choosing to be induced at around 39 weeks[4]. Studies have shown that, should the EDD be off by only one-week, adverse neonatal and childhood outcomes are still increased at 38 weeks gestation[5].

Many expecting parents choose to undergo routine ultrasound to check for possible anomalies or defects in their developing baby. A potential negative outcome of this is that many congenital defects and prenatal diagnoses have high false positive rates and, researchers have determined, that routine prenatal ultrasound may result in “unnecessary psychological burden to prospective parents.”[6] In 2010, it was determined by existing evidence that there is no “conclusive evidence that the use of routine umbilical artery Doppler ultrasound, or combination of umbilical and uterine artery Doppler ultrasound in low-risk or unselected populations benefits either mother or baby.”[7] In fact, one evaluation discovered that women who received uncertain diagnoses during their pregnancy, necessitating ultrasound assessment, could be found still possessing traits of anxiety 3 months after their babies were born[8]. There really just is no evidence that “routine ultrasound scanning in pregnancy improves the outcome… [and] it does not result in an increase in the number of live births or a decrease in perinatal morbidity as measured by Apgar score.”[9]

It’s becoming increasingly popular for obstetricians to offer a routine growth screening sometime during the third trimester (usually between 28-30 weeks). A major issue to note is that, because of these ultrasounds, many women are pressured into induction for baby’s size, or because of an abnormal amount of amniotic fluid. Some expectant mothers are even diagnosed with fetal macrosomia, or big baby. While this diagnosis may be concerning to the mother, research shows that there is significant error seen when estimating fetal weight by ultrasound, and that relying on ultrasound for the estimation of fetal weight can lead to unnecessary intervention[10]. Women diagnosed with fetal macrosomia are often pressured into induction in order to avoid potential complications. However, the Journal of Perinatology says that fetal weight alone is not an indication for an induction of labor, as induction does not reduce the risks of cesarean section in cases of larger babies[11]. Possible shoulder dystocia (when the shoulders get stuck during delivery) also is a common concern among those diagnosed with fetal macrosomia. Research shows that it’s not necessarily the size of the baby that puts them at risk, but rather the number of interventions, with assisted delivery (forceps or vacuum), and induction of labor each almost doubling the chances[12]. With fluid levels, no universal measurement exists, so the operator uses subjective assessment to determine if there is an issue. The validity of these assessments is not well documented, but statistics show that many diagnoses of abnormal fluid levels are correct less than 45% of the time.

Sometimes though, in cases of bleeding or when medical concern arises, non-routine ultrasounds are recommended if, for nothing else, than to ease the anxiety of the mother. As with any medical procedure the risks vs. potential benefits should be weighed and understood by the expecting mother. Unfortunately, many technicians are not well-versed in the possible risks, so the patient is unable to make a completely informed choice. So, what are the risks of ultrasound?

The FDA warns it is important to remember that ultrasound, as commonly used as it may be, is a form of energy and has the ability to produce biological effects on the body and laboratory studies have shown diagnostic levels of can cause a rise in body temperature[13].Temperature is a very precise thing when it comes to pregnancy and, because of this, the American College of Obstetrics and Gynecologists (ACOG) recommends that pregnant women not even spent time in a hot tub as it could raise the body temperature to unsafe levels. Pregnant women are encouraged to keep their core body temperature below 102.2F, which is 3.5 degrees above normal body temperature. Studies have shown that higher-than-normal body temperatures, even as low as 101F for an extended time, can produce adverse effects in the developing child[14]. The most common of these are neural tube, congenital heart, and oral cleft defects. Even lengthy hot showers have been shown to produce some of these same defects[15]. Because the fetus is actively developing and growing, it is important to understand how disturbances caused by ultrasound can affect them. When dealing with ultrasound, bone heats much more quickly than does soft tissue or water, and evidence has shown that “biologically significant temperature increases at or near to bone in the second trimester if the beam is held stationary for even 30 seconds”.[16] It seems that thermal concerns with ultrasound pose a higher risk during the second and third trimester when the fetal bones are strong enough to intercept (and absorb) ultrasound waves[17]. This is especially important to note because the brain is encased in bone, and “significant temperature increase can occur in the fetal brain.”

Ultrasound seems to be generally accepted as safe, but the fact of the matter is the effect of a raised body temperature and ultrasound has never truly been examined in depth. On thing that is for sure: ultrasound devices are only getting stronger. Devices available in 1992 and before had acoustic outputs that didn’t exceed 94 mW/cm2. In the United States today, the average intensity is 720 mW/cm2 – more than 7 times stronger, with no additional research.

Sound waves emitted by sonogram machines reach a frequency greater than humans are capable of hearing, so the waves themselves have been assumed safe for the fetal ear. Recent research has challenged this though with scientists discovering that an ultrasound examination could be “as loud as that made by a subway train coming into the station” to the developing baby[18, 19]. When pointed directly at a hydrophone, an ultrasound probe produced sound that registered at 100 decibels. To put that into perspective, just 15 minutes of listening to headphones at 100 decibels can produce hearing loss and damage in an adult – imagine what it’s doing to the developing ear! Even being around an idling bulldozer (85 decibels) can produce lasting effects on hearing. A recent study, in 2010, found that in 2005, hearing loss among adolescents had jumped 30% with 1 in 5 teenagers suffering noticeable hearing loss[20]. Histories of 3 or more ear infections, firearm use, and loud noise exposure for 5 or more hours in a week were factors that were accounted for and determined not to have caused the significant increase. To further expand on the potential link between hearing loss and ultrasound, one case-controlled study found an association between prenatal ultrasound and delayed speech[21]. Researchers who conducted the study urged that “If there is no obvious clinical indication for diagnostic in-utero ultrasonography, physicians might be wise to caution their patients about the vulnerability of the fetus to noxious agents.” 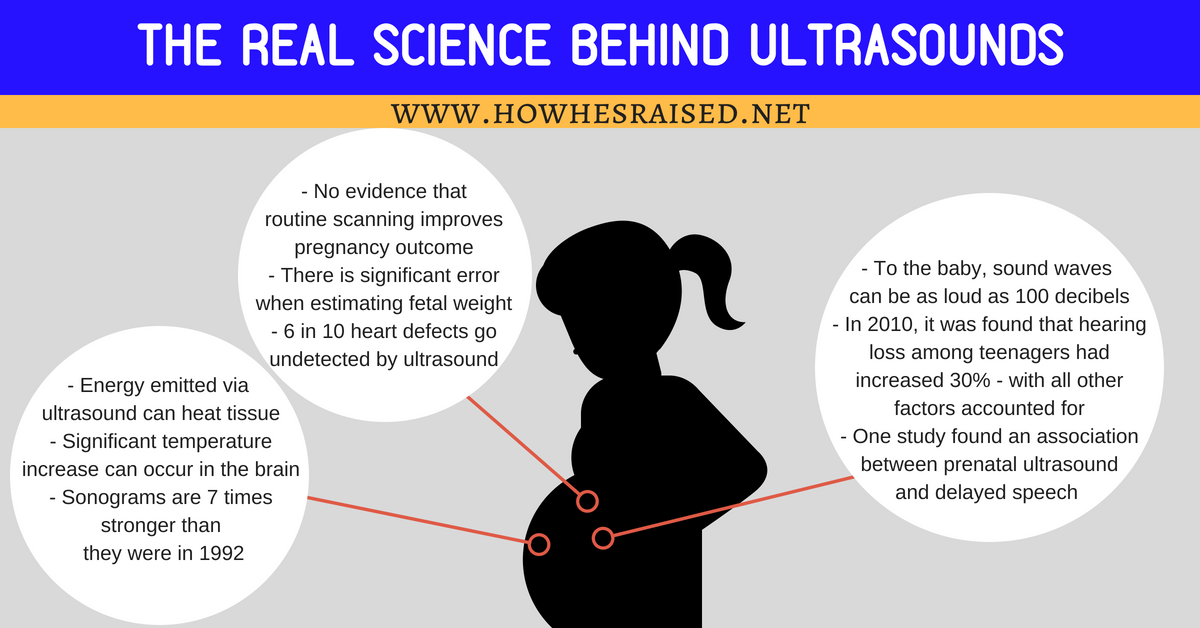 In some studies, frequent ultrasound has been linked to possible growth restriction. One randomized controlled study compared a group of women who received only ultrasound at 18 weeks gestation, and the second group received an ultrasound at 18, 24, 28, 34, and 38 weeks. Regarding growth, the difference between the two groups was of great significance[22]. The intensive group had much higher cases of intrauterine growth restriction. Another study, conducted in 2004, also examined the possible link between growth restriction and ultrasound and found that exposure to prenatal ultrasound does have an impact on intrauterine growth but there was no statistical difference in measures of growth development later in life (1-8 years old)[23].

Today, ultrasounds are common and accepted that a pregnant woman can get one in a mall. These “keepsake ultrasounds” have sparked real concern in the medical community, as the true risks behind these ultrasounds are greatly unknown. Recently, the FDA issued a statement against elective ultrasounds and listening to baby’s heartbeat with an at-home doppler as they are not performed under the watchful eye of a trained professional[25]. Because of the time, 3D/4D ultrasounds are much stronger than traditional 2D, and the risks associated with ultrasound are even more possible. The truth still remains: ultrasounds are a very under-studied medical intervention, with even less being known about 3D/4D.

Ultimately though, it is up to the mother to weigh the benefits and risks to determine whether an ultrasound is the correct decision for her. One of the most important aspects though is for said mother to be fully informed, and we simply don’t see that today. More research most definitely needs to be done on the techology and it’s potential risk to a developing human. As Beverly Beech, chairman of the Association for Improvements in Maternity Services stated “I am not sure at all that the benefits of ultrasound scans outweigh the downsides. We should be advising women to think very, very carefully before they have scans at all.”