4The first bath, we all know the scene – it’s pretty much standard procedure in hospitals around the country: baby is whisked away, normally an hour or two after birth, to be cleaned of all that ‘birth goo’. But, what if we’ve been doing it all wrong? What if those fresh newborn babies really aren’t dirty after all? Research is beginning to reveal the countless benefits of delaying standard newborn care practices, like the first bath[1].

According to the World Health Organization, it is ideal to wait at least 24 hours after birth before bathing a baby[2]. And healthcare professionals are recognizing the detrimental effects that immediate bathing can have on the newborn, such as hypothermia, respiratory compromise, and increased oxygen consumption[3]. “Considerations for the timing of the first bath should also include the stability of the newborn as well as the impact on skin-to-skin time, breastfeeding initiation and early family interaction.“Scientists working together on one study, conducted in 2008, came together in a consensus agreement: removal of the vernix is not necessary for hygienic reasons[4]. Even when the first bath is given, it should not be by scrubbing the newborn clean. “The goal of the first bath should be to remove unwanted soil such as blood and meconium and to leave residual vernix intact.”

Many babies are born covered in a white, creamy substance, comprised of skin cells and proteins called vernix. Some babies can almost look like they’d been slathered with melted cheese at birth because of the amount of vernix on their skin- often the later one is born, the less vernix they will have (similarly, early babies born before about 28 weeks will have very little vernix). In the womb, this substance acts as a protective, waterproof barrier between your baby’s sensitive skin and the amniotic fluid. Common practice has been to wipe this substance away immediately after birth, and then to clean the rest of it off during the first bath, but many new moms are choosing to leave it for hours, and sometimes even days, after birth. Studies are uncovering the incredible antimicrobial and anti-fungal properties of this, once mysterious, substance, as well as the moisturizing capabilities and temperature regulation benefits[5]. It can promote wound healing, and help with successful breastfeeding. It truly is remarkable, and should it be left alone for the first postnatal week, it can offer the skin significant protection and aid in adaptation to the outside world[4].

So, Why Delay the First Bath?

1. Guards Against Bacteria and Fungi

Analyses and examinations of both the components and functions of vernix have become increasingly more common in recent times. So far 41 different proteins have been identified in the material, 21 of them existing in vernix alone, and nearly 30% of them have direct antimicrobial properties[6]. A study performed in February 2003 discovered, by obtaining samples, that the vernix caseosa (vernix) “exhibited strong antibacterial activity against Bacillus megaterium, in addition to antifungal activity against Candida albicans”[5].

Because the majority of babies born in the US are born in hospitals, which are filled with sick people, they are already at an increased risk of developing some sort of infection. In a 2016 report, the CDC stated that “On any given day, about one in 25 hospital patients has at least one healthcare-associated infection.”[7] With a newborn’s immune system being practically nonexistent, it seems almost ridiculous to remove this incredibly protective layer that they are born with. Samples have also shown that vernix contains proteins which are part of the innate immune system, as well as offering broad-spectrum defense[8].

It is already extremely well known that newborns can sometimes have a little trouble maintaining body temperature. This is primarily because, according to the Children’s Hospital of Philadelphia, compared to their weight, an infant’s body surface is about 3 times greater than an adult’s[9]. All of this surface area can cause them to lose heat easily and quickly, four times faster than an adult. In healthy full-term babies, immediate skin-to-skin with the mother is most recommended to help them maintain ideal temperature. This temperature regulation is absolutely essential for survival, and the small step of immediately placing a newborn to his mother’s chest has been shown to reduce neonatal death by up to 42%[10].

Regardless of the use of warm water, immediate bathing after birth puts the newborn at an increased risk of developing hypothermia[11]. And, while children who are born at a healthy weight seem to be able to handle thermal regulation often seamlessly, aiding low-birth weight infants in temperature control continues to be an issue today. When newborns were allowed to retain the vernix until it came away naturally, typically about 5 days, considerable reduction was seen in cases of abnormal temperature[4].

In the United States, breastfeeding rates remain much lower than ideal. With nearly 80% of infants having been breastfed at birth, but only 40% still exclusively breastfed at the end of the newborn period (3 months), something is obviously greatly affecting these success rates[12]. Research is now pointing one finger at early bathing techniques employed by many hospitals around the country. One hospital, whose standard practice was to bathe newborns at around 2 hours old, increased breastfeeding rates from 32% to 40% by delaying that first bath until 15 hours of age[13]. They found that by simply delaying the bath alone, the infant’s chances of successful breastfeeding were increased by 166%. This truly is not a surprising thing to read once fully appreciating the necessity of immediate skin-to-skin after birth. Not only aiding in temperature regulation and breathing control, skin-to-skin soothes and comforts the newborn, while also offering easy access to the breast. The more stress on the baby (considering birth itself is stressful enough), the less likely they are to initiate breastfeeding.

Neonatal hypoglycemia, or low blood sugar in a newborn, can quickly become a scary situation and should definitely be avoided as much as possible. Immediately after birth, a baby’s stress is likely to be higher than normal, and in a healthy newborn, calming and soothing (with skin-to-skin) should be on the top of the list. Unfortunately, with bathing being a priority in many hospitals, the stress continues to be piled onto the baby. Excess crying (commonly seen in the first bath), and release of the stress hormone, cortisol, can cause a newborn’s blood sugar to drop. Low blood sugar often results in a drowsy infant who is hard to rouse in order to breastfeed. Subsequently, their blood sugar continues to drop.

Some babies do have certain risk factors for neonatal hypoglycemia such as: too small or large for gestational age, premature birth, and maternal diabetes. One study examined neonates directly after birth and found that those who had their first bath delayed (until at least 12h of life) had a less than 4% chance of developing neonatal hypoglycemia[14]. Those whose first baths were not delayed had over double the risk of developing the condition, with 8.5% suffering from low blood sugar. In newborns labeled high risk, those whose first baths were delayed had a 14% chance of developing the condition while, once again, those who were bathed immediately after birth had double the risk at 28%. 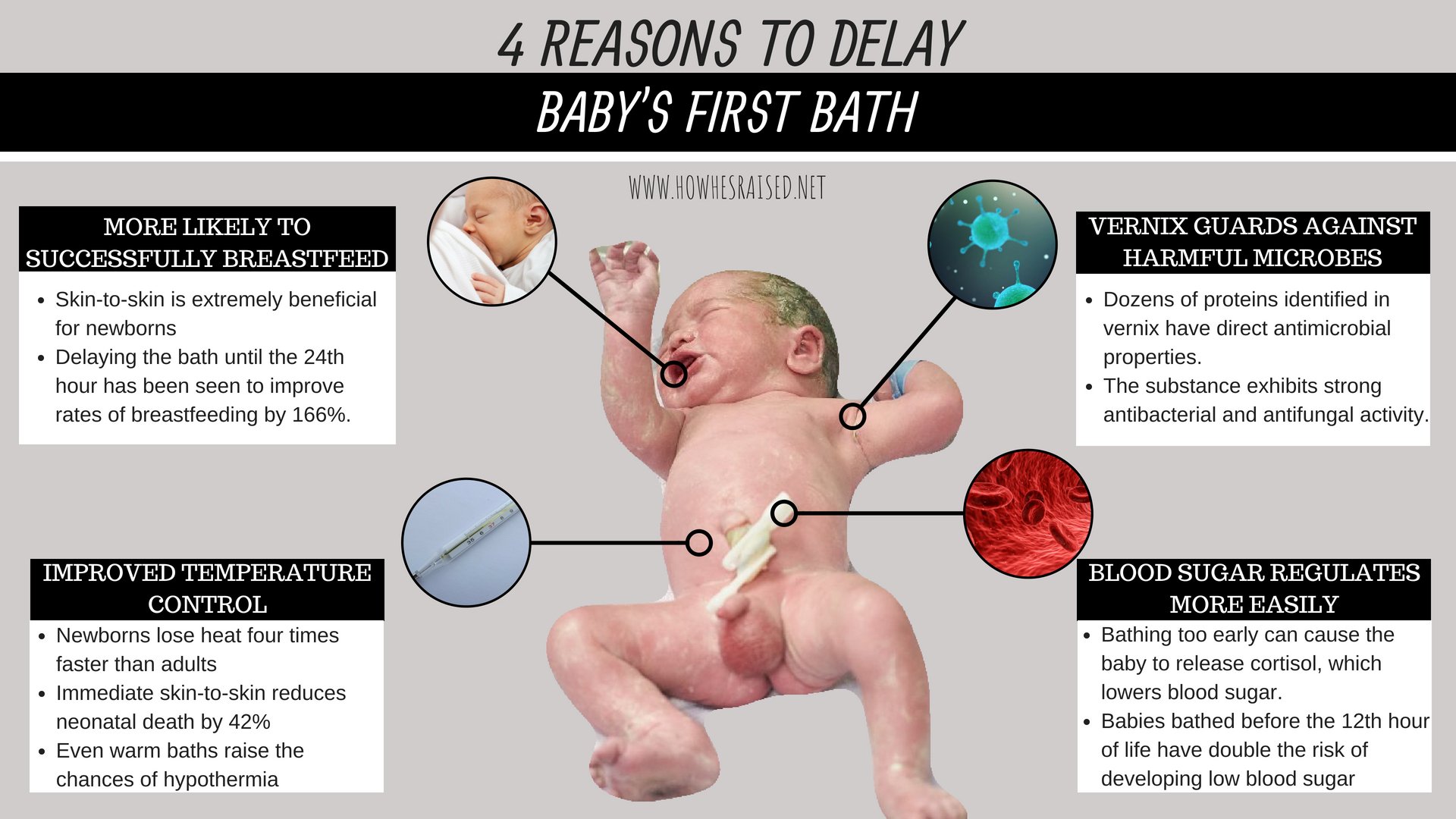 Delaying the first bath not only has numerous health benefits for baby, but it also gives mom and dad a chance to participate in such a special ‘first’. This also gives the new parents a chance to learn the best techniques for bathing their baby, as well as getting some hands-on experience. And, while this practice isn’t standard among most hospitals in the country, it can be a standard for your family.