But What About Polio?

A growing number of the population is beginning to question the necessity of all these vaccines. With less than 50% of American adults receiving the flu shot last year[1], and 40% of adolescent girls remaining unvaccinated for HPV, it’s interesting to speculate why such a large percentage has chosen to be so hesitant of these particular vaccines[2]. Because, of course, one would be downright foolish to opt out of one of the important vaccines right? Polio, that’s one of the ones that you need. What with the history of iron lungs and crippled children, we’d all like to avoid something like that happening again.

But, what if I told you that everything you’ve ever learned about polio is an outright lie? Then what?
Well, then maybe the vaccine isn’t so lifesaving after all.

In 1952, the United States was booming. Hollywood was releasing iconic films, computers were becoming commercially available, and .04% of Americans were being affected by the polio virus[3].  The country would still have to wait a whopping three years before the first polio vaccine would be introduced though, but that’s okay, because the disease would already be on a rapid decline until then. As time continued on, living conditions cleaned up, and running water became much more commonplace. As polio is most often spread by ingesting contaminated feces of an infected person, cleaner living conditions naturally meant less disease. According to Dr. Bernard Greenburg, elected member of the National Academy of Sciences and the American Epidemiological Society, much of the decline can also be pinpointed to one event that took place in 1954: a change in diagnostic criteria. In that year, as new paralytic diseases were being identified, the label of paralytic poliomyelitis was only given to patients who exhibited symptoms “for at least 60 days after the onset of the disease”. Prior to this change, anyone who exhibited symptoms for only 24 hours were given the diagnosis of poliomyelitis[4].

In this period, we literally began reporting new diseases, like Cocksackie virus and aseptic meningitis, and according to Dr. Greenberg, before 1954, a large number of these cases “undoubtedly were mislabeled as paralytic polio.”[5] One very popular case of this was President Roosevelt’s diagnosis of paralytic polio at only 39 years old. Because the diagnostic tests simply weren’t available at the time, most doctors used only symptoms to diagnose. Today, researchers can look back at the presentation of Roosevelt’s illness (which paralyzed the legs first working all the way up to the neck, instead of affecting the limbs unevenly), the excruciating pain he suffered in the affected limbs, and the age of onset. All of these components make it extremely unlikely that it was actually the polio virus that struck him at all, but instead an autoimmune condition still very misunderstood today: Guillain-Barre Syndrome[6].

When it comes to the polio virus, 95% of all polio cases were completely asymptomatic, most weren’t even reported, though the sufferer was granted lifelong immunity to the virus anyway[7]. 4-5% of patients suffered flu-like illnesses, 1-2% developed pain and stiffness in the muscles, and less than 1% resulted in paralysis. Between 1953 and 1954, most likely because of the change in diagnostic criteria, cases of polio plummeted by 17,000 cases – and this was before the vaccine had even been released. After the vaccine was released in 1955, cases fell by less than 5,000 cases. This is interesting because, while the polio vaccine is often praised as being the reason for the downfall of the disease, the disease was already following a downward trend in recent years – dropping 22,000 cases between 1952 and 1953 (2-3 years before the vaccine was released)[3].

Though the presence of polio was reliably trending downward, in 1955 Jonas Salk introduced the very first vaccine against the virus. And to everyone’s surprise, the trend stopped. Polio cases started climbing and even vaccinated individuals were being hit. Between 1957-58, reported cases spiked 50%, and in the following year, they jumped another 80%. In 1962, Dr. Bernard Greenberg testified before Congress that, not only was the vaccine responsible for the increase in cases but, reported statistics were actually intentionally skewed and altered to determine the effectiveness of the Salk vaccine[8].

At that point though, the bogus statistics were the least of concern. See, the polio vaccine may have caused an entirely new problem altogether, one that was entirely avoidable had one doctor’s voice been heard. In 1954, one year before the vaccine was approved and licensed Dr. Bernice Eddy, the one in charge of monitoring the safety of Salk’s vaccine, reported a potentially catastrophic effect of the vaccine. Monkeys that had been injected with the virus were suffering disease and severe paralysis. Eddy photographed these monkeys and brought them to her superior, but she was ignored, and the drug was licensed and advertised to the public in 1955. And, had even one person heeded Eddy’s warning, a tainted vaccine wouldn’t have been given to 98 million innocent people[9]. Bernice Eddy was actually onto something when she noticed that the monkeys were being affected. Not only was the polio vaccine causing polio, but it had also been contaminated in the lab, by a virus later identified as SV40[10]. And, unfortunately for we humans, this virus is extremely dangerous. When SV40 was granted access to the human body, via injection, it literally began altering human DNA. By switching off the human gene, p53 which offers a protective effect against cancer, a new world of problems began. Because while, to this very day, vaccines have yet to be tested on whether they cause cancer, it has been well documented that SV40 does[11, 12]. 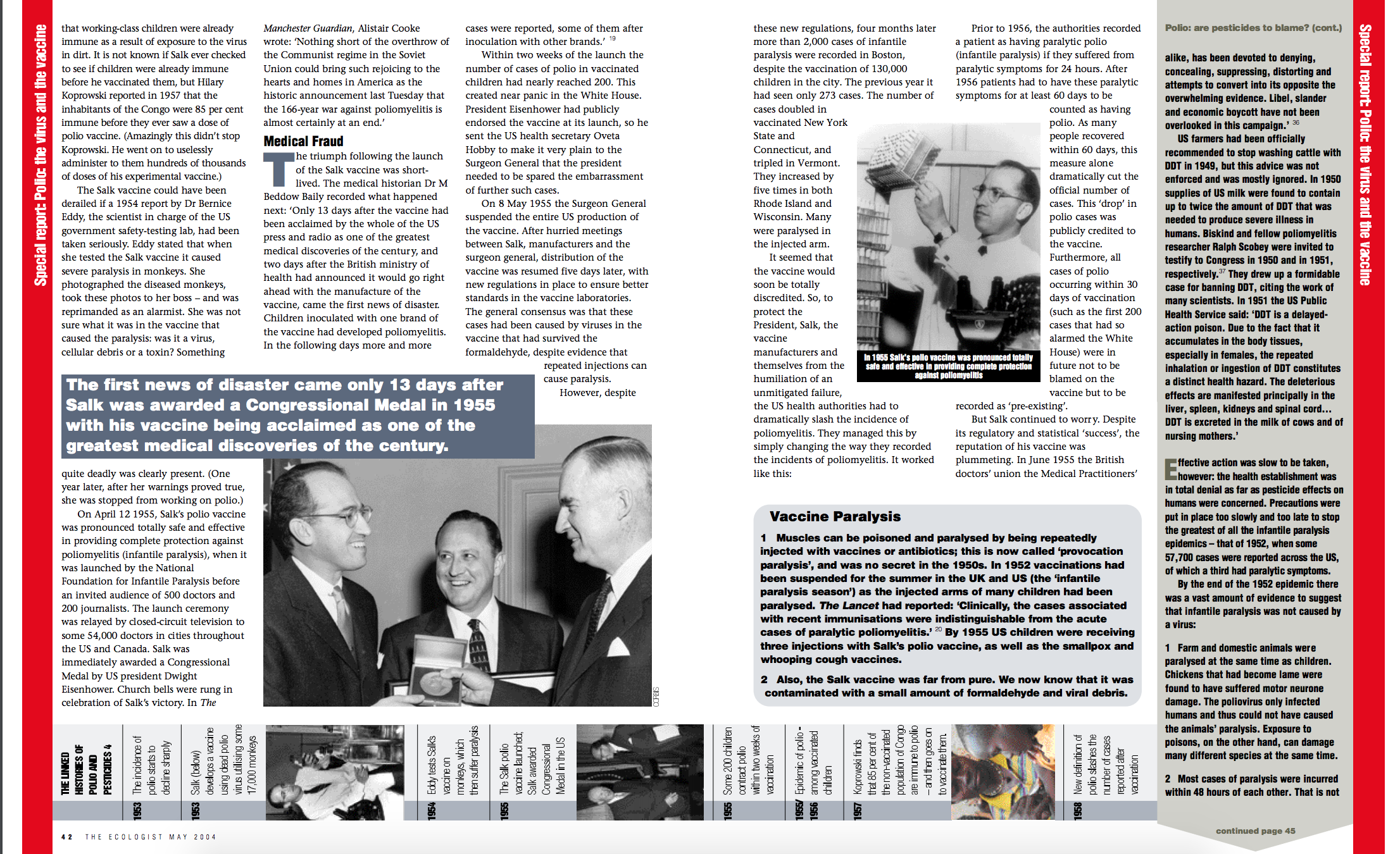 In 1963, Jonas Salk’s injected polio vaccine was discontinued, and quickly replaced by the live, oral vaccine developed by Albert Sabin. As a way to try and avoid contamination with the SV40 virus, vaccine developers stopped import of the rhesus monkeys, and instead switched to the African Greens who, it was believed, couldn’t carry the virus. Keeping the oral vaccine contaminant-free was of utmost importance as, because it was live, any additional viruses inside also would be. As Sabin’s vaccine was undergoing testing in Russia, Maurice Hilleman a well-known Merck scientist, discovered that it also contained the SV40 virus[13, 14].  After approaching Dr. Sabin about this discovery, the news was swept under the rug, and a running joke was that “we would win the Olympics because the Russians would all be loaded down with tumors.” Despite this, Sabin’s vaccine was approved, and three doses were given to US children until 1999.

Throughout the three decades that the OPV was administered to American children (and is still being administered in the developing world), recipients were being severely injured. Now recognized as vaccine-associated paralytic poliomyelitis (VAPP), the oral polio vaccine has been linked to causing thousands of cases of polio. These vaccine-derived cases “can cause poliomyelitis in the recipient of the vaccine or in a contact”, and 100% of all cases of polio since 1979 in the United States were found to have been cased by the Sabin vaccine[15].

Despite the fact that there hadn’t been a single case of wild-caught polio in the United States for decades, a new, injectable, inactivated vaccine became available on the childhood schedule in 1997, and remains there today. Phillip Minor, head of virology at the National Institute for Biological Standards and control says we’re at a point now where we are “basically using the vaccine to protect against the vaccine.”[16] In 2017, according to the Polio Eradication Initiative, there were only 21 cases of wild-caught polio in the world. In that same time period there were four times as many people affected by poliomyelitis derived from a vaccine[17]. Today’s vaccine is still cultured using monkey kidneys, and thus still contains those cells (which we can only hope aren’t contaminated with an SV40 or some unknown virus)[18].

Because children are expected to receive three doses of the IPV before kindergarten, as a parent or caregiver, it’s important to weigh the risks and benefits of medicine, especially preventative, administered to your child. Children growing up today have a higher chance of being killed by a cow than catching a wild-strain of polio, so examining the ingredients present in the vaccine expected to be given to them for safety is vital. According to the CDC[18], the IPV vaccine contains highly questionable ingredients like formaldehyde, which has been causally linked to reproductive and developmental damage[19], and brain cancer[20]. Streptomycin, a serious antibiotic used to treat infections like tuberculosis, can also be found in today’s polio vaccine. This antibiotic has a long list of potential side effects, like fatigue, nausea, hives, wheezing and shortness of breath, dizziness, and fever[21]. Another antibiotic, polymyxin B, can also be found. This antibiotic’s side effects range from dizziness, fever, and back pain, to rash, hives, and loss of coordination[22].

The polio vaccine has a long list of failing, and causing way more issues than it’s worth. Besides causing the very disease it intends to prevent, both the OPV and IPV have ruined the lives of so very many people. When weighing potential outcomes of receiving this vaccines, it’s important for parents to understand the very disease in the first place. And the truth of the matter is, polio would have decreased, and eventually disappeared, without the vaccine. I mean honestly, how can further use of a vaccine be justified when it is creating more cases of the disease than the environment is?

Oh, and the only reason we don’t have iron lungs today is because they’ve been replaced with the ventilator.